Our Women’s teams, Seniors and Reserves, will be playing in the newly formed VPLW (Victorian Premier League for Women) which is a new statewide league placed between W-NPL and WSL1. 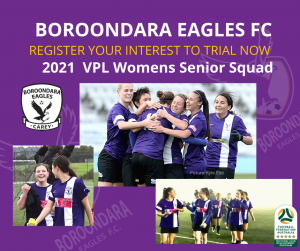 We are so excited and keen to get to season 2021 and continue the journey towards NPLW!!

During the next two years, our teams played in the Women’s Premier League. 2015 provided great results with the women finishing as Premiers in the WPL and winning the state-wide Team App Cup.
The next three years saw our top women play in the State League 1 division.
In 2016 and 2017, the BEFC Women’s Seniors and Reserves teams were Premiers of State League 1-SE.

In 2018, our Senior Women were Premiers and Champions of this league. Our Reserves team was runner-up in their league.

The club is extremely proud to support Women in Football and aims to provide a great team environment, great success, great opportunities and great facilities. This is something that we continually work to improve.

WE LOVE TO ASSIST OUR WOMEN PLAYERS SUCCEED ON AND OFF THE FIELD. WE ARE DOUBLY HAPPY TO HAVE PLAYERS WHO WISH TO COACH AND MENTOR OUR YOUNGER PLAYERS AS WELL!

For current, new and trialing players wanting to be a part of this:

𝗧𝗿𝗶𝗮𝗹 dates are: MONDAYS November 30, December 7 and December 14, 2020
𝗧𝗿𝗶𝗮𝗹 location is: Carey Sports Complex Bulleen
𝗧𝗿𝗶𝗮𝗹 start time is: 7.30pm
If you are up for the excitement and challenge, 𝘆𝗼𝘂 𝗠𝗨𝗦𝗧 𝗿𝗲𝗴𝗶𝘀𝘁𝗲𝗿 𝘆𝗼𝘂𝗿 𝗶𝗻𝘁𝗲𝗿𝗲𝘀𝘁 𝗽𝗿𝗶𝗼𝗿 𝘁𝗼 𝗮𝘁𝘁𝗲𝗻𝗱𝗶𝗻𝗴 these trials by contacting our coaches below:
Dilan Lomas operations@befc.com.au 0406 193 642
or
Elise Kyrgios ekyrgios7@gmail.com 0424 815 700

* Please note that studded boots are NOT allowed pre-season.